RACING RETURNS TO THE FORT

FORT ERIE, June 15, 2021 – The 124-year-old border oval kicked off the racing season on Tuesday with a tremendous card featuring two Cup races, the Sprint into Summer and the Summer Solstice Cup. The opening day card saw $1.2 million in wagering.

The first race on opening day went to Souper Deputy for trainer Julie Mathes and jockey Chris Husbands. He returned $3.20 to his backers. The leading trainer at last year’s meet, Mathes was happy to be back in the winner’s circle on opening day.

“My husband, myself, and our team at the barn are very elated. We’ve put a very long hard winter into the horses, and we are very happy to see it paying off. It was a great way to start the season,” said Mathes.

Jockey Chris Husbands rode two winners on opening day, while jockey Pierre Mailhot rode three winners on the card. Mailhot captured the Sprint into Summer Cup aboard Gunzig Stinger. Trained and owned by Claudia Rabstein, the four-year-old son of Signature Red battled back from a stretch duel with Red Mercury to win the $30,000 Cup race. The other feature race on the card, the Summer Solstice Cup was clinched by Lost Corsage. Owned by Jeanne Ryan, the four-year-old filly romped home victorious under the setting sun with veteran rider Kirk Johnson aboard. 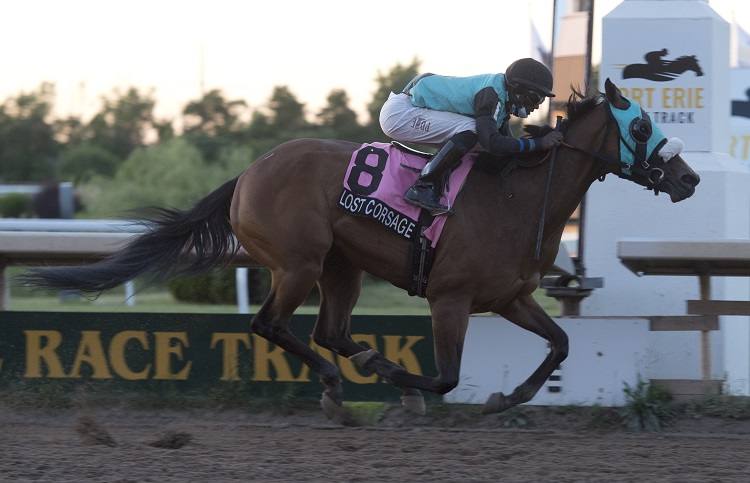 For trainer Daniel Wills, Lost Corsage exceeded his expectations in the race.

“It wasn’t the original expectation. We bought her from John Charalambous at the end of the year and he said that she would do really good at Fort Erie and she was blossoming. Kirk worked her from the gate and said if you run her in the Cup she’ll win. It wasn’t the plan originally, but I just went along with what he’s got to say, and we took a shot and got lucky.”

Breezing the filly in the morning, Kirk Johnson felt very confident about his ride going into the race. “The way she breezed and how much horse I had - it just gave me chills. You know you just get that feeling as a rider.”

Fort Erie’s racing season includes 39 days, running Mondays at 1 p.m. and Tuesdays at 4 p.m. until Labour Day. From September 6 onwards, post time will be 1 p.m. for both days.

Racing will continue without spectators, however, fans can watch a live HD stream online at https://www.forterieracing.com/streaming-and-replays