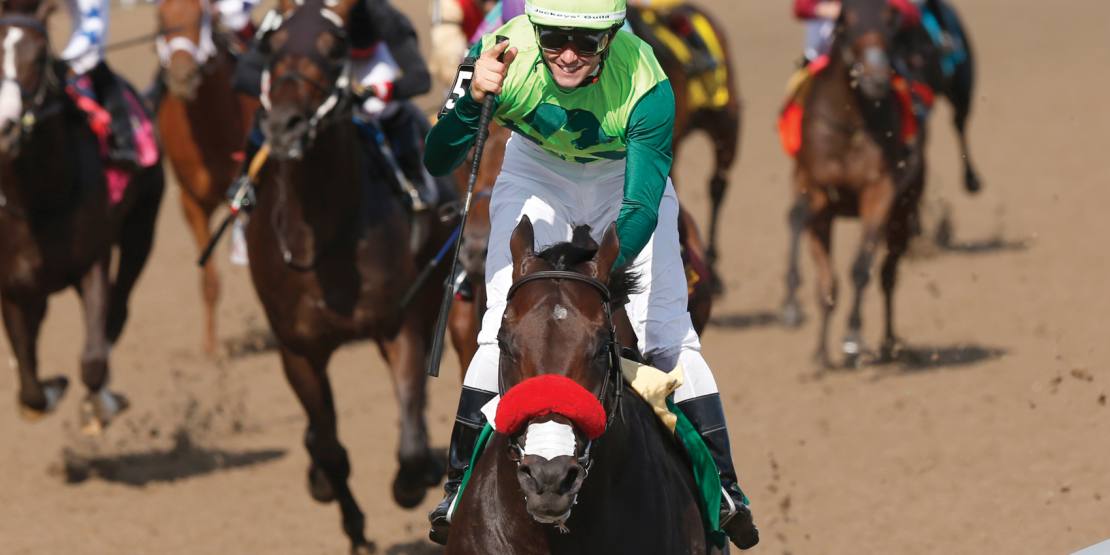 FORT ERIE, July 19 – Five contenders from the Queen’s Plate will rematch on the dirt surface at Fort Erie Race Track for the 84th Prince of Wales Stakes. The race is the 2nd Jewel in the OLG Canadian Triple Crown, to be held on Tuesday, July 23.

After conquering the Queen’s Plate with a 3 1/2 length lead, One Bad Boy will be looking for another victory in the OLG Canadian Triple Crown, with jockey Flavien Prat back in the saddle. The duo will be looking for their second win on their quest for the OLG Canadian Triple Crown and the $500,000 bonus to be awarded by OLG to a horse that can sweep all three races. They will be leaving the starting gate from post position one, running the 1 3/16 miles on the dirt track.

“He’s used to working on the dirt track at Santa Anita, he trains over it well,” said part owner Brooke Hubbard about One Bad Boy when asked how she thinks he will handle the dirt track at Fort Erie. “We know there is a lot of history to this track so we are super excited to be here. We are looking forward to taking on the Canadian Triple Crown, it’s one of the main reasons we decided to stay in Canada.”

After leaving from position 14 in the Queen’s Plate and finishing second, Avie’s Flatter and jockey Javier Castellano will be looking for better results this time around for trainer Josie Carroll and owner Ivan Dalos. Carroll and Dalos won the Prince of Wales in 2016 with Amis Gizmo. “Avie’s Flatter skipped over the track and seemed very comfortable. He’s a very consistent horse across every surface,” said Carroll after Avie’s Flatter worked at Fort Erie last week.

Carroll is also training He’s a Macho Man for owner Di Scola Boys Stable, and brought him down for training last week as well with jockey Patrick Husbands, who will be in the saddle for the Prince of Wales. “I’m glad we brought him down. Patrick Husbands worked him and said he was a little lost on the track because he likes to take a look at everything, so his time wasn’t very fast but Patrick loved the way he got across the track,” said Carroll.

Rounding out the field is Skywire, with jockey Eurico Rosa DaSilva for trainer Mark Casse, who won last year’s Prince of Wales with the filly Wonder Gadot. Skywire was the 2-1 post time favourite and finished 11th in the Queen’s Plate, however was hampered badly by an inward-breaking Tone Broke. After a steward’s inquiry the results remained unchanged. Tone Broke finished third, and will be the fifth contender in the Prince of Wales with jockey Ricardo Santana Jr., leaving from post position 3 for trainer Steven Asmussen and owner L and N Racing LLC.

The Prince of Wales Stakes is Fort Erie Race Track’s signature event. The race is the second jewel in the OLG Canadian Triple Crown, between the Queen’s Plate, which was held on June 29 at Woodbine Racetrack, and the Breeders’ Stakes coming up on August 17 on the Woodbine turf course.

First race post time is 3:55 p.m. on Tuesday, with the Prince of Wales scheduled for about 7:40 p.m. Fans can dine from a variety of food trucks that will be onsite and enjoy live music throughout the grounds. After the races, Jonesy will be playing live at the trackside Tiki Bar. The concert is rain or shine, moving indoors in the event of inclement weather.

The event will be televised from 7-8 p.m. EST on TSN 1, 3, 4 and 5 as part of the Canadian Triple Crown broadcast, sponsored by OLG.

Admission and parking are free. For more information, visit forterieracing.com.