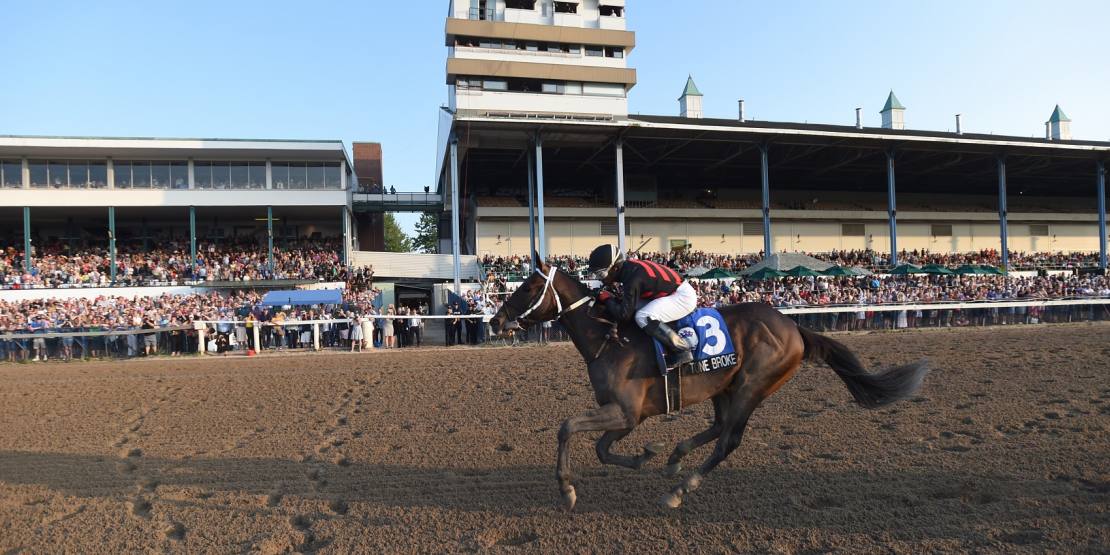 Fort Erie, July 23, 2019 – Tone Broke crushed One Bad Boy’s Triple Crown dreams when he rallied past the favoured Queen’s Plate champion in the stretch to win the 84th running of the $400,000 Prince of Wales Stakes, second leg of the OLG Canadian Triple Crown, on Tuesday at Fort Erie Race Track.

Tone Broke broke well and settled away third in the field of five, as One Bad Boy, who was off a step slow, established the lead from the inside post with Avie’s Flatter prompting the pace in a replay of the Queen’s Plate.

One Bad Boy set sensible opening fractions of :23.50 and :48.02 while Avie’s Flatter continued to stalk the leader before surging ahead in the stretch past the 1:12.59 three-quarters mark.

Meanwhile, Tone Broke fanned wide and overhauled the front-runners to score by two lengths in 1:56.56.

"He broke sharp and he put himself in a spot that he wanted to, that’s what the horse does, and he was really nice and comfortable in the position he was,” said Santana after the race. “As soon as I started asking him when we turned for home, he kept running and I know I had plenty of horse. He ran a really nice race today.

“The longer the races are, he’s going to be better and today he proved a lot. He kept fighting to the end and he gave me a nice finish at the end.”

Avie’s Flatter finished second, a neck ahead of One Bad Boy, who was supplemented to the Prince of Wales Stakes for a fee $12,500 after he won the million-dollar Queen’s Plate on June 29 at Woodbine Racetrack and set out to take home the $500,000 bonus offered this year to any horse that could become the first to sweep the OLG Canadian Triple Crown since Wando did it in 2003.

“He broke a step slow,” said Flavien Prat, jockey of even-money favourite One Bad Boy. “I left out of there and I was fine on the lead – he was comfortable, he was relaxing well – but when I asked him to make a run he could not stay the same pace. It’s probably not his best surface and the start might have cost him a little bit too.”

“I kind of think he’ll go ahead and finish up the Canadian Triple Crown, but actually it’ll be up to Steve and the owners to decide,” said Darren Fleming, assistant trainer to Asmussen, on the next assignment for Tone Broke. “I think the further the better and he’s versatile. He’s been on the [synthetic track] one time and he liked it. I don’t think the turf will bother him a bit. He’s that good, he’s a nice horse.”

The third jewel of the OLG Canadian Triple Crown is the $400,000 Breeders’ Stakes on August 17 at Woodbine Racetrack over 1-1/4 miles on the E.P. Taylor Turf Course.

The undercard was highlighted by a victory for Mr Changue in his first race back at Fort Erie after being rescued from a sinkhole on July 11. Mr Changue was grazing in the backstretch when the ground gave way due to a watermain break. He battled back to win in the 4th race with jockey Kirk Johnson in the saddle.

April's Handicapping Challenge finale is by invitation only.  Registration begins at…